Jump To The Most Common Fuel Oil Tank Charts

Check Heating Oil Prices Near You

We have dealers in thousands of zip codes around the Northeastern United States! Enter your zip code below to check prices:

Use our oil tank level calculator to quickly convert inches of oil to gallons, based on tank geometry.

This tank can fit about 250 gallons

*The height must be greater than or equal to the width

*The height must be less than or equal to the width

*The height must be greater than or equal to the diameter

*The length must be greater than or equal to the diameter

How To Measure Your Oil Level 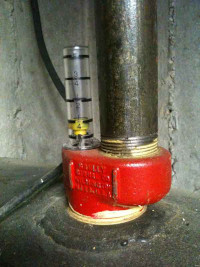 Many home heating oil tanks are equipped with a float gauge that will indicate roughly how full a tank is, but this is not a very accurate way to measure your oil level. Float gauges will give a general idea of how much oil you have (unless they have stopped working due to sludge buildup or other failure modes), but if you are trying to figure out how much heating oil you can fit in your tank or you don't have a float gauge at all, the most accurate way to manually measure your oil level is with a long, clean stick. You can even buy a stick with markings on it specifically for this purpose. Make sure it is long enough that it cannot drop into the tank!

To measure with a tank stick, you will need to remove a plug or cap from the top of the tank, and then lower the stick straight down into the hole until it touches the bottom of the tank. Then remove the stick, and measure how many inches of oil are shown on the stick. Next, use the calculator on this page or one of the fuel oil tank charts to determine how many gallons of oil are in the tank. This number will not be exact, but it should be pretty close.

If you are measuring your fuel oil tank because you want to know how much oil to order, keep in mind that the oil company will not fill any tank all the way to the top! They will always leave room in the tank for expansion. A good rule of thumb is that they will try to fill the tank to about 90% of the rated capacity, or roughly 250 gallons in a 275 gallon tank. 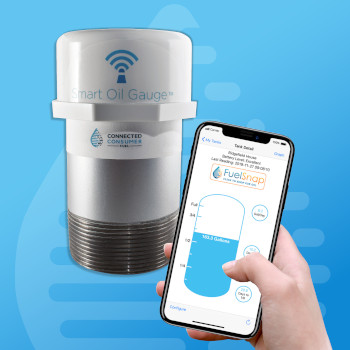 One more thing - If your tank is above ground and you are tired of using a stick to measure your oil level, check out the Smart Oil Gauge! This wireless tank level monitor will connect to your home's WiFi network and measure your tank level every hour. You can check the level from anywhere on your smart phone or computer, and even get low level alerts via email or text. And with FuelSnap, you can order home heating oil right from the Smart Oil mobile app! It has never been easier to manage your home heating oil.

The 275 gallon vertical oil tank is by far the most common tank used for home heating oil. This tank is usually filled to a maximum of about 250 gallons (about 6 inches from the top of the tank) to leave room for expansion.

The 330 gallon vertical steel tank is very similar to the 275, but is a foot longer. These tanks are generally filled to around 300 gallons.

The 275 gallon horizontal (flat) tank is almost the same shape as its vertical counterpart, but it lays flat on its side for low-clearance installations. These are much less common than the vertical tanks but are still used relatively often in crawl spaces and under decks. These tanks are usually filled to about 250 gallons.

The 330 gallon horizontal (flat) steel tank is very similar to the 275 horizontal, but is a foot longer. These tanks are generally filled to around 300 gallons.

The 500 gallon cylinder is usually filled to about 450 gallons.

The 550 gallon cylinder is usually filled to about 500 gallons.

The 1000 gallon cylinder is a common size for underground tanks. These tanks are usually filled to about 900 gallons.